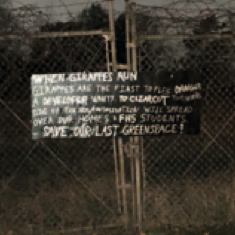 VERY RECENTLY, THERE WERE FOUR NEARLY LIFE-SIZED STATUES OF GIRAFFES standing in the last of 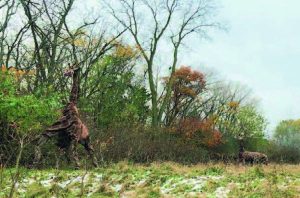 Ferndale’s large green spaces adjacent to the controversial Pinecrest Holdings mixed housing development that’s been underway for quite some time.

Nearby, a sign read: “Giraffes are the first to flee danger. A developer wants to clearcut the woods, dig up the soil/contamination will spread over our homes and FHS students. Save our last green space!” Not long after being placed, however, the statues and the sign were removed by local law enforcement.

According to the artist and sculptor responsible for the message (who wishes to remain anonymous),

“Giraffes are the first critters to flee an area when there’s severe strife. It goes back to a native, mythological belief that because of their long necks, giraffes can see trouble before it happens. They can see into the future and know when something’s coming.”

He said he wanted to make a statement about eliminating the city’s last green space, especially because he considers himself a “friend to the environment” and uses only natural materials in his art. 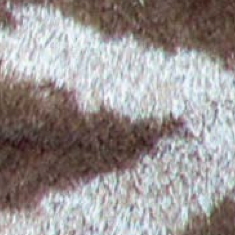 “There were four giraffes altogether – a mom, dad, and two kids. Police cut down the sign. The little ones are gone. The mom and dad have been knocked down. All in all, I have about four months of work in it and $350, including 37 yards of fabric, some jute cord, 200 feet of chicken wire, and spray paint. As a nature lover, this green space is important to me. There are old trees there that will be cut down. The developer said they’re going to save as many trees a possible, but what does that mean? Before you know it, they’ll just say they couldn’t save anything.”

URBAN PLANNING MASTER’S DEGREE CANDIDATE, Leah Deasy, provided some additional insight into the status of the development project. “Process-wise, I believe the City has received application materials from the developer, Pinecrest Holdings LLC, seeking site plan approval for a Planned Unit Development (PUD) on the two parcels south of the high school on Pinecrest. The last word from City staff was that these materials are in the process of being reviewed. They have not yet been made public.” She added, “Pending completion of the application and staff review, the PUD formal application could come before the Planning Commission for a vote on December 5 or 19. Before a vote, the Planning Commission will take public comment on the project. If approved by the Planning Commission, the PUD moves on to City Council for approval.”

Jordan Twardy, Director of Community and Economic Development for the City of Ferndale, confirmed, “The project team is currently responding to feedback from their last appearance at the Planning Commission in July 2018 as well as the recent community meeting in October 2018. Critical next steps include a more detailed site plan and a development agreement. If those pieces are completed by the developers and submitted to the City, they could appear before the Planning Commission.”

NOT ALL RESIDENTS ARE PLEASED, HOWEVER. “I would say that there has been a lot of concern from residents on the environmental conditions of the site,” said Deasy. “Residents are very concerned, thoughtful and deliberate. We want to know exactly what risks we are facing from contaminants at the site currently and what risks we could be exposed to by disrupting it. What I’ve observed so far is that residents still have so many unanswered questions that they don’t feel anyone has enough information yet to responsibly make a decision of this magnitude.”

She continued, “The community also feels hurt by the misdeeds of past landowners at this site – Ethyl Corporation using the forest as a dumping ground for trash and chemicals and the needless destruction of Ferndale’s only Albert Kahn-designed house, circa 2012. It is a hard pill to swallow to think that no one can be held responsible for past actions at this site and that we have little choice but to consent to more destruction for its future.”

The local artist added, “The developer is not being specific about the plans. This is another big problem I have with this. They’re not being honest with us or the City, and the City says it’s private property so they can do anything they want.”

A group of concerned individuals, who’ve coined themselves the Southwest Neighborhood Association, has formed in order to discuss the issues at hand. “There was a meeting with the City. The City is not interested in a parcel of land, and Pinecrest Holdings LLC doesn’t own the land, they only have an option to buy. Just come out and be honest with us – no ifs, ands or buts.”

Deasy explained, “There is clear consensus from residents, however, that any development should be concentrated on the south portion of the site and that the forest area towards the mid-north end of the site should be preserved for the benefit of the community. We desire to see dense, walkable, mixed-use development on the 8 Mile frontage of the property, at the corner of 8 Mile and Pinecrest, and for the 15 acres of forest to remain intact. We’d like the nature that has made this site its home to stay and want the process of bio-remediation that has already started onsite to continue. We think if the developer would think more ‘innovatively’ about the relationship between current and future land use onsite and the value of the ecosystem services already in existence there, we could have something really special.”

Twardy addressed this concern. “The project, if approved as a PUD, will require the preservation of a significant number of old growth trees as well as the provision of north-south and east-west pathways for public use throughout the site,” he said. “In response to public feedback, the developers will also be looking at ways to increase the size and accessibility of open green space and wooded areas. Additionally, space is being set aside –currently proposed for the eastern portion of the site – for a defined public space, which, if the project is approved, would be designed with public input.”

THE ANONYMOUS ARTIST SAID, “There’s a large herd of deer there, coyotes, and it’s home to owls and a couple of species of bats that are endangered. It’s a beautiful place. It really is. It’s been astounding, and it will be heart-wrenching to have it all paved. The City is trying to get revenue generation and tax money, I get it. But it will also cost us money, in additional police and fire resources. And, imagine if you clear-cut everything. Then, it’s August and hasn’t rained in a month to a month and a half. The contamination will scatter, and we’ll all be breathing it and brushing it off our furniture. The students will all breathe it in.”

Addressing clean-up concerns, Twardy said, “The project will be required to, prior to any construction, clean up all contamination in accordance with applicable state and federal environmental standards. The entire site will be required to be cleaned up prior to any development activity. The applicable standards for cleanup also have provisions for ensuring the continued safety of all adjacent and nearby properties. The result would be a situation that is safer and cleaner for the property and surrounding neighborhoods than currently exists today.”

He added, “Additionally, separate from the developer’s efforts, the City has approved funding of up to $20,000 to perform an environmental concerns inventory for the site. We are in the process of also seeing if grant funds can be used to pay for the study. Our goal is to have the study completed in time for the project’s return to the Planning Commission or, at the latest, by the time the project goes forward to City Council for final approval, which would only occur if the Planning Commission were to approve it.”

As far as her personal thoughts regarding the development, Deasy, too, is concerned about the wildlife. “Myself, I often think about the deer. I’m partial to deer and having them intermingled within our city suburbs thrills me. I think that’s something really special to Michigan and Metro Detroit – that we have so many deer and that they are welcome and enjoyed alongside our neighborhoods in places like Troy, Rochester Hills and Farmington Hills,” she said. “A lot of the people focus on the trees on this site – and they are huge and amazing, but they also provide a habitat for deer and this is the only place I know of in Ferndale where deer live. When we remove the last deer habitat in the city, we are unequivocally stating that wildlife is not welcome in Ferndale. I also think the destruction of this forest will have a negative impact on our air quality, heat index and storm water retention that we do not fully understand.”

She added that the communal power of local residents shouldn’t be discounted or ignored. “Regardless of the outcome of this specific site development, neighbors have bonded together to build community. We’ve met and become familiar with people on our blocks and across our corner of the city and Royal Oak Township. We’ve organized a neighborhood association that we intend to formalize by seeking guidance from more established organizations and to continue working to make our awesome community even better. We are working together to harness our communal power and we have lots of ideas.”