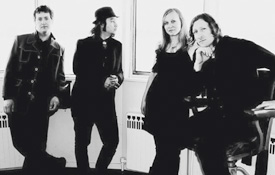 One can best comprehend the kaleidoscopic rock of Duende as a journey, since you’ll just be ceaselessly searching for the perfectly proper way to sum up their sound. Keep searching.

The Ferndale foursome (Jeff Howitt — singer/guitarist, Laura Willem — drums/backing vocals, (“Jelly Roll”) Joel McCune — guitar/backing vocals and Scott Sanford — bass/backing vocals) share a slew of diverse musical tastes, embodied dynamically by the piquant variety found on their most recent album, Murder Doesn’t Hide The Truth. Whereas several local music fans felt that album could well prove to be their defining musical moment, it seems it’ll be topped, still, by the tremendously cool and confident ventures of their next LP, Mezcal, which debuted at the end of May
and is now available.

At seven years and running, Duende is the era-defying, genre-defying and category-denying soundtrack of a wild walkabout through greenrooms, basements, dim lots and loud venues that’ll assuredly entice all those still comparably reverent for the purely defiant poets of trashy garage-pop and Beat-crazed carpe-diem, and for all those equally curious about the exhilarating possibilities when you merge funk with psychedelia, surf-rock with blues, do-si-do and some rockabilly into an amped-up garage-rock boogie.

How a band can coherently translate such an eclectic mix demonstrates the range of talents and graceful balance realized by the group on their recordings, captured over at Ferndale’s Tempermill Studios, the de facto HQ for Gangplank Records. They sufficiently endeared themselves to the scene by regularly hosting monthly revues at The Loving Touch called DUENSEDAYS, a series started five years ago at the old Club Bart. Mezcal was released on May 31, with Bellyache Records providing an impressive run of vinyl, featuring artwork by Tato Caraveo, photography by Brian Roxman and a layout by Slasher Dav. (Mezcal was produced by Dave Feeny of Gangplank Records).

THE APPROACH
Laura Willem: “Many practices start with us warming up, messing around and then Jeff says ‘Hold on, let’s record that!’”

Jeff Howitt: “Originally, I’d bring in lyrics and a riff or a progression and we’d lock into simple arrangements. After a year and 20 shows with essentially two different line ups (with Laura
and I at the core), Joel then moved to Detroit in late ’07, and we started a different approach. By Florence To The Mad Man (released in late ’10,) every member (with Sanford) was in on the song.”

Scott Sanford: “We have a certain connection as musicians and as people and it allows us to work together pretty efficiently. Some parts are open ended so we never play them the same way twice. We have to pay attention to each other to see where it’s going to go.”

Joel McCune: “We became more at home with (Producer) Dave Feeny in Tempermill. We’ve evolved our recording process to allow even more freedom and spontaneity. It’s much more fun when we are done, because we never know what it will sound like until we finish.”

SONG STYLES
Sanford: “Regardless of what type of song anyone’s idea ends up becoming, we still make it sound like ‘Duende’.”

Willem: “Sometimes I think: ‘Are we all-over-the-place?’ Yes, maybe…but that’s just what we do. It’s interesting, fresh and we’re able to showcase our influences in that way.”

NEW ALBUM
Mezcal opens up with a doozy of a dance storm called “One More Time.” It’s a trippy surf-rock shuffler that documents a frenzied weekend filled with friends spinning all the hits: Thee Milkshakes, The Woggles, Heavy Trash, Sebadoh, The Halo Benders, Jack Oblivion and even fellow Ferndale outfits like The Beggars and The Oscillating Fan Club. Those all form a small fraction of their jostling influences.

EVOLUTION/JOURNEY
Howitt: “With Murder Doesn’t Hide The Truth (in ’13) we developed half the songs in studio, making our psychic and sonic decisions in the moment. We wanted something collectible, to hold in your hand, we included the lyrics for you to pore over in a playbill for a story. Mezcal (out now) is close to how fuzzy and lurching our live show is, even though we’ve mostly always record live.”

Willem: “With Joel in the band for seven years and Scott for four, yes, this feels like the band. I feel more comfortable maneuvering through shows and recordings, with the time we’ve put in. I think evolving is led by letting yourself continue to be inspired and letting that translate back to the music.”

McCune: “It’s hard to have opposing muses: a reverence for folk forms, country, rockabilly, bluegrass, jazz, blues—and I mean original, old timey blues, then for that whole ‘kill your idols’ mentality of punk, post-punk and experimental noise. I think Duende is the first band that really allows the indulgence of both sides and still makes coherent sense. Songs, evolving on the spot, it requires more trust and courage, but is also more rewarding.”

Sanford: “We all have a hand in shaping songs, and that’s what’s most rewarding for us.”

FERNDALE
McCune: “Tempermill, Loving Touch, (Duensedays) are very important parts of what we do. Having a local forum to hone our set, and a place to rub elbows with quantities of local talents, is invaluable and a pleasure. And Dave Feeny (Tempermill) has become the essential ingredient in our records, the filet’ to our gumbo! Duende is always looking to ‘get around’ more but we are very lucky to have it so good, here in Ferndale.”

Howitt: “Duenseday’s allowed us not to treat every show as a publicity stunt with a perfectly scene-groomed line up and focus more on people who are Family or could be to us. At seven years (with Duende,) I love playing with a band that’s only been hacking away a year or so. That keeps intact, for us, the raw excitement anyone has when they make their thing public and start finding what works…outside of the basement.”

…Duende have found what works…just about anywhere. The journey continues with Mezcal.

NEXT SHOW
Duende perform at the New Way Bar on June 27th with Bay City’s YUM and The Ghost Wolves (from Austin TX). More info: https://www.facebook.com/duende.ole and http://duendetroit.bandcamp.com/

If something happened with our health, we believe there is a solution to any maladies in a medicament. What medicines do patients purchase online? Viagra which is used to treat impotence and other states connected to erectile dysfunction. Learn more about “sildenafil“. What people talk about “viagra stories“? The most vital aspect you have to look for is “sildenafil citrate“. Such problems commonly signal other problems: low libido or erectile dysfunction can be the symptom a strong health problem such as soul trouble. Causes of sexual dysfunction include injury to the penis. Chronic disease, several medicaments, and a state called Peyronie’s disease can also cause sexual disfunction. Even though this medicine is not for use in women, it is not known whether this medication passes into breast milk.