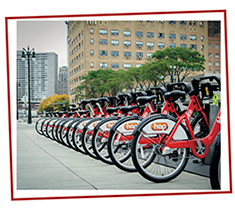 IF YOU’VE HUNG OUT IN DOWNTOWN DETROIT at all in the past couple years, you’ve probably noticed a flurry of new modes of transportation: the Q-Line, electric scooters, and a bike-share program called MoGo.

Since its launch in May of 2017, the MoGo bike- share program has notched hundreds of thousands of rides, proving a successful new mode of transportation for residents and visitors of Detroit. The program currently has about 430 bikes at 44 stations across ten neighborhoods of Detroit, including Downtown, Midtown, and Corktown.

What’s more, MoGo is now expanding into Southeast Oakland County in an effort to broaden their reach in Metro Detroit. Coming soon, the cities of Oak Park, Berkley, Huntington Woods, Ferndale, Detroit and Royal Oak will be getting their own MoGo stations. This new network of bikes and stations in the region will help residents and visitors reach their destinations and connect to other services such as SMART and DDOT. 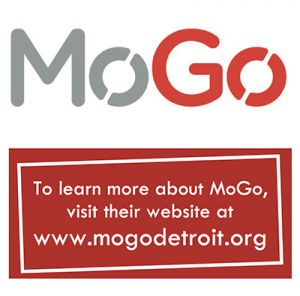 Oak Park will have five stations strategically placed throughout the city, making sure that residents in each part of town have close access to a station. Altogether, the expansion will bring about 30 new stations and 150 additional bikes to the region.

IF YOU’VE NEVER USED OR HEARD OF MOGO BEFORE, it’s very simple to learn and use. Prospective riders can purchase one of the various types of passes online, on a smartphone with the Transit app, or at any one of the stations. After payment, you get a code, unlock one of the bikes, and hop on. When you’re done, simply find the nearest MoGo station to return your bike and lock it up. To do so, slide the bike firmly back into an empty dock and wait for the green light to appear to make sure it’s locked securely.

This expansion of MoGo is being funded by a Transportation Alternatives Program (TAP) grant from the Southeast Michigan Council of Governments (SEMCOG) in the amount of $495,380, a match from each community, as well as with paid sponsorships. Getting this expansion from idea to reality, including securing the funding, was a team effort by Justin Lyons of the City of Ferndale as well as MoGo Founder and Executive Director Lisa Nuszkowski.

So, this Summer, instead of walking or driving to a nearby location in Southeast Oakland County, considering hopping on a MoGo bike. Using MoGo is affordable, time-saving, fun, healthy, and environmentally-friendly.

Prev123Page 3 of 3
Search Our Site
Categories