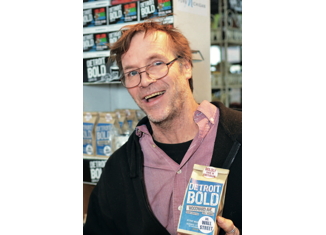 The Detroit Bold coffee brand was born in Ferndale, and it’s Chief Bean Officer, AJ, was born in Highland Park and spent most of his life in every town up and down Woodward from the Detroit River to Pontiac. He is a Ferndale legend, as the former proprietor of AJ’s Café and progenitor of the “Danny Boy” and “Assembly Line” marathon concerts, among many other things. Recently he has become embattled in a lawsuit over the name of his coffee company.

The local entrepreneur sat down with Ferndale Friends for an interview about his life, Detroit, coffee and his company and the lawsuit.

DW: What is your relationship with coffee and the city of Detroit, and how did it spark you to start your own coffee company?
AJ: My relationship with coffee as it applies to my company is rooted in our café, AJ’s Music Café (April 1, 2007-April 1, 2012) on 9 Mile in Ferndale. I began selling it in one pound bags out of the cafe in 2009. We started selling retail, first to Ferndale Foods, in 2011.

It was there that for those five memorable years that we became an epicenter of sorts, for grassroots causes in the Detroit area, and earned the title of “the little cafe that bailed out the American automobile industry, one cup of coffee at a time.” At that time, no other subject was of more importance than the struggling auto industry and the economic pain our entire region was suffering through. People were losing jobs more than ever due to a whole new technological age that was displacing our whole industry, and our way of life was imploding in a decades-long crescendo.

Because we had a music café, and with that a stage, we had venue — a small but somewhat familiar place — and when I took it over it had achieved some prominence in the local music and open mic community. I sort of inherited that. So, we brought in open mic nights which helped regain the spot as a destination. Ted Berlinghof’s open mic Wednesday’s were fairly legendary, and that led us to our first foray into marathon concerts.

We held a quirky Danny Boy marathon in 2008 which made global news, and attracted over 1000 people to sing 700 versions of that Irish air on St. Patty’s day weekend. We instantly gained five minutes of fame and enough social capital to become somewhat of a household name, if not at least a familiar one. Our Danny Boy marathon was worthy of a Guinness record, or so I thought. Several months went by after I had submitted the necessary documentation that Guinness required, only to be told that they did not have a “single-song longevity marathon” record, nor did they wish to have one.

It was Guinness that suggested that we attempt the “longest continuous concert by multiple artists,” an event that was regularly monitored and updated. So, we took them up on it. That following March, 2009, we broke the Guinness record and Detroit Bold coffee was born!

DW: How has your company grown since its start and what has the reaction of Detroiters been?
AJ: I began selling Detroit Bold out of the cafe in 2011 under the banner name of “Assembly Line Blend, Industrial Strength coffee,” in 2009. We had two varieties; our dark roast was “Detroit Bold” and our light roast was “Fisher Body,” in deference to our auto heritage. Two years later, we adopted the Detroit Bold Banner for all of our varieties.

My first retail store was Ferndale Foods. By the suggestion of fellow local businessman and good friend, Jack Aronson, I took his suggestion and kept the operation small in the early days to see if the product was viable and would sell. Boy, did it! We are now in approximately 300 stores and growing! I still personally stock the shelves and tend to Ferndale Foods as much as I can.

DW: Recently there’s been a lawsuit filed against Detroit Bold. How did that happen and what’s your prediction of the outcome?
AJ: Yes, we are being sued by an unknown and obscure entity out of New York who claims the rights to “Detroit Coffee Co.” They maintain that our name, “Detroit Bold Coffee Co.,” confuses their potential customers. They are attempting to take our good name.

I am not at liberty to discuss much of the case but I can say that our name, our story and our dedication to providing excellent products and being that essence of what it means to be Detroit Bold is more than a product or a name. It is a civic pride, born of authenticity that comes from being a part of the fabric of where you come from and that is not something that can be bought or taken away.

DW: Regardless of the lawsuit what will your future plans be with Detroit Bold?
AJ: As of any attempts to usurp our name, Detroit Bold is far more important than a product. It is my vision to contribute to an awareness that the city of Detroit and her people are the essence of the truest grit, determination, talent and hard work that has kept this country at the forefront in far more than our awesome cars. To be “Detroit Bold” is to take ownership in your community in ways that make you proud because you, the everyday, ordinary hardworking human are the backbone of a community and we need every one of us. We can never again let Detroit be the poster child for neglect, disinvestment and collateral damage for an economy that would leave anyone behind. So, the future is to be an example of a good company that contributes to the community economy and supports our neighbors, celebrating our magnificent diversity.