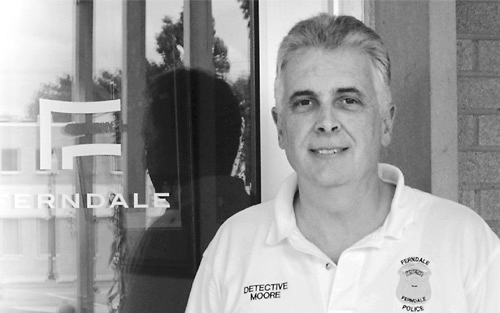 Ferndale Police Detective Brendan Moore has a voice that’s anything but hard-boiled.

A tenor, he began singing in high school, performing in theater productions and in choir as a hobby. After a stint in the armed forces, he joined the Ferndale Police Department, where he’s helped keep the community safe for the past 27 years. Besides a couple of stints with community theater, he didn’t sing much at all. That began to change a few years ago.

“The kids were grown.” He explains, “I had more time.” He was drawn to a local classical singing group called the Twelfth Night Singers, where he discovered that his old high school choir coach was the director.

His co-workers knew of his singing endeavors, because one day the police chief came up to him and asked, “Do you know the national anthem?”

Detective Moore said yes, and the chief handed him a flyer for something called the “Home of the Brave Contest.”

Sponsored by Comerica Bank, the contest is open to firefighters, police officers, emergency medical technicians, members of the armed forces, and military veterans. Entrants record themselves singing the national anthem and upload it to YouTube. People vote on their favorite, and the winner gets a $10,000 grant for their station or unit, plus the opportunity to sing the anthem before a Tigers game at Comerica Park — plus 35 game tickets,so all your family, friends, and colleagues can come and see you do it.

“I entered last year and this year.” Detective Moore says,with a laconic shrug. “This year, I won.” His wife shot the video in their living room, a simple set-up with drawn blinds and an American flag hanging behind him.

I congratulate him, and he looks almost apologetic. “It isn’t really a talent contest.” He says. It’s more about who can get the most people to vote for them. “But I hope that if my version was terrible, they wouldn’t vote for me.”

No worries there. Detective Moore went to the Tigers game on September 27 against the Minnesota Twins and, before about 38,000 fans, looking smart in uniform, he sang the anthem.

Was he nervous? “No.” He says. Everything looks bigger than you think when you’re standing out on the field, he admits, but there were no butterflies. “It was just amazing.”

Does he get any ribbing from his co-workers? “Constantly,” he says, dryly.

Will his experience change any aspect of his job? Will he be singing suspects their Miranda Rights from now on? I finally get a chuckle, and an emphatic “No.”

I ask if he plans to branch out, maybe start singing for a rock band? No, he’s happy with classical. Then he stops and thinks about it for a second. “Maybe something like James Taylor.” he says thoughtfully.

If slightly happened with our soundness, we believe there is a solution to any maladies in a preparation. What medicines do patients purchase online? Viagra which is used to treat impotency and other states coupled to erectile dysfunction. Learn more about “sildenafil“. What folk talk about “viagra stories“? The most essential aspect you should look for is “sildenafil citrate“. Such problems commonly signal other problems: low libido or erectile disfunction can be the symptom a strong heartiness problem such as core trouble. Causes of sexual dysfunction switch on injury to the penis. Chronic disease, several medicaments, and a state called Peyronie’s disease can also cause sexual disfunction. Even though this medicine is not for use in women, it is not known whether this medication passes into breast milk.