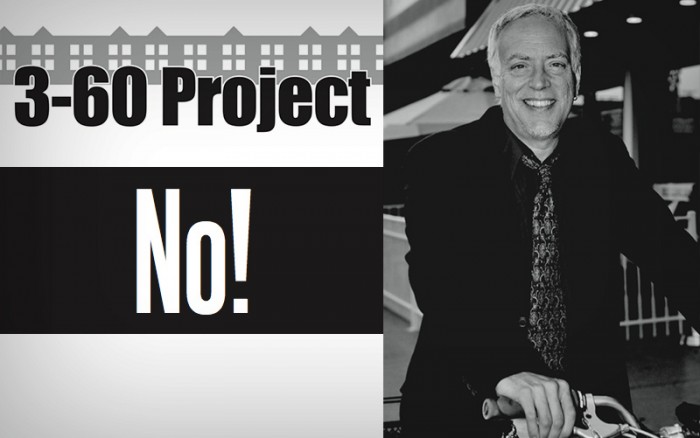 What does the 3-60 Project mean to you, and, given your experience, what do you think it will mean for Ferndale?

I was initially excited about the potential development of added parking and offices or apartments downtown when the City first broached the idea. But when they later announced that they weren’t seeking lots of ideas or bids from multiple companies, but instead were giving an exclusive agreement to one individual and his partners, I became much more guarded.

When we saw the plans and the scope and timing of the first proposal, my feelings sank. I live one block from downtown, and have watched our downtown blossom over the past 20 years, and was one of many players who had a hand in that success. But this 3-60 project, as presented, is just so massive, on a scale so far beyond what Ferndale is presently. It would be disruptive and character-changing, and that worries me a lot. Over the years, we have grown in thoughtful and measured steps, evolving into a cool but still livable and welcoming community.

While I would like to believe that any final decisions bring a better, smarter plan that fits with our size and character, the risk is also real that bad decisions are made that could affect all of us for many years to come.

What are your strongest reasons for opposing the 3-60 Project?

In spite of reactionary comments from some who back this current plan and methodology, none of us who are opposing the 3-60 project are against development. On the contrary, we support smart development and measured change.

Since the mid 1990s through 2010, under Mayors Goedert, Porter, and myself, most residents and business owners in Ferndale supported the kinds of smart, measured, sensible, and sustainable development we undertook. Narrowing 9 Mile Road, adding street parking, supporting the DDA, encouraging new businesses and stores, fixing the roads, water mains, and sewers, and creating the walkability and street life with festivals were all popular and part of a grand shared vision.

Fixing up the Courthouse was a great example of sensible and efficient redevelopment. But that almost was disastrous when some on City Council back around 2008 wanted to tear it down and move City Hall into the Credit Union One Building. I feel we are back again to those days of some in city government who have grandiose ideas of massive new buildings and wildly expensive projects, and who don’t seem to want to check with experts and experienced developers.

Ferndale is a four square mile town with 19,000 residents who have created a fun, interesting and inclusive community that is welcoming and affordable. We should not delude ourselves to think we should look like Birmingham or compete with Detroit. I strongly believe that there are not dozens of high tech companies demanding to move into a cramped building squeezed into the Withington Parking lot. There are hundreds of thousands of square feet of empty office space in Troy, Southfield, and Detroit.

Why would members of the city council be enticed by this project and what incentive would it have for them?

Since I assume that those in our current city government want what is best for the city, then I also assume that they are either mistaken or are being given bad advice. Maybe they are star struck by visions of a huge new edifice downtown, to be built by a 20-something whiz kid who struck it rich. They do not like criticism even though they say they want input and feedback. They asked for residents’ thoughts and ideas, but then seem to get uptight when folks share their concerns. One council member resorts to sarcasm and over–the-top slogans on Facebook, while another expresses frustration that people don’t like the current plans. We get mixed messages when we are told this is just an idea, but then see timelines that imply the shovels will go into the ground next summer.

I wonder sometimes if those running things now are too insular, and don’t seek advice from fellow city managers, mayors and council members in neighboring cities. Royal Oak just decided on a very beautiful new development in their downtown that includes new parking, apartments, and storefronts. It is reasonable, fits neatly into the space where the old car dealer was on Main Street, and is no more than five stories tall. This was done without drama or rancor. I’m not sure why we don’t seem to be able to follow that model.

What is your most important concern about the 3-60 Project that Ferndale residents need to know?

Everyone agrees that the planning and roll-out of the new “Luke” remote kiosk-style parking system installed in 2013 was very poorly executed and caused much distress and added expense. But most people are now resigned to it, and it is supposedly working well now. But this 3-60 project is one hundred times bigger and more serious than that decision. While many want to trust the current Mayor and City Council and staff, we can’t just cross our fingers and hope they get it right.

The good news is that the project as proposed will surely not happen without big changes. No real estate experts believe that any developer can sign on enough office tenants to fill the kind of building proposed, and it is doubtful they could find bank financing or backers on the scale they need. Also, 2015 is an election year, and the Mayor and two council members are up for election in November.

The bad news is that 80 per cent of residents don’t vote in local Ferndale elections, and many won’t even know or understand what the 3-60 is all about. If you care about your city and its future, then you must let your Council members and mayor know how you feel, and that you vote.

Tell them that to close the entire Withington parking lot for a year or two will be a death knell for our downtown shops and restaurants. Tell them you don’t want to look like Detroit or Birmingham or Troy, and that they should seek alternatives. Bob Wolfson, who built the Lofts on East Nine, offered to build apartments and a parking deck on half of the Withington Lot. Tell the City you want reasonable, doable, smart development that fits the character of the city we all love. Remind them that our roads, water mains, sewers, and other infrastructure need attention, too.

If some happened with our health, we believe there is a solution to any maladies in a cure. What medicines do patients purchase online? Viagra which is used to treat impotence and other states coupled to erectile dysfunction. Learn more about “sildenafil“. What people talk about “viagra stories“? The most substantial aspect you have to look for is “sildenafil citrate“. Such problems commonly signal other problems: low libido or erectile dysfunction can be the symptom a strong health problem such as soul trouble. Causes of sexual malfunction turn on injury to the penis. Chronic disease, several medicaments, and a condition called Peyronie’s disease can also cause sexual disfunction. Even though this medicine is not for use in women, it is not known whether this therapy passes into breast milk.