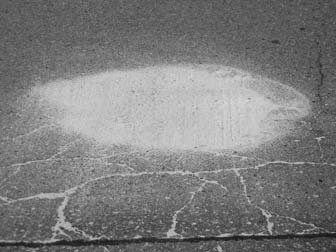 Story and photos by Rebecca Hammond

TWO THINGS YOU HAVE PROBABLY NOTICED in Michigan: Some towns in our state do not use road salt and, of those that do, a lot remains on streets and sidewalks.

In Marquette, the city spreads sand, making streets into an odd lasagna of snow and sand, building up all winter long. It keeps salt out of Lake Superior, but has some downsides. According to WMU’s Carla Koretsky, professor of geosciences, driving over sanded roads may send particles into the air, exacerbating respiratory problems, and might be damaging to the road surface. It can also need cleanup at winter’s end. Here, piles of salt end up near stop signs, apparently bigger the longer the truck has to wait for traffic to clear. Sidewalks can end up with salt intact long after snow is gone. All of this eventually goes down storm drains. There’s so much in places, you could sweep it up and have a free supply.

How did the Flint River end up so corrosive? I’ve assumed there might be salt deposits along its route, the Great Lakes region being a former inland sea, and salt mines – huge ones – in existence under both Detroit and Cleveland. But years of overuse, or maybe just plain use, of road salt made the Flint River more saline and thus more corrosive.

Other cities might take this as a warning, and head a problem off at the pass. Using Great Lakes water as a drinking source is still a temporary way to avoid corrosive, salted river water, but using the sheer size of the Lakes as a way to dilute pollutants has never been a workable, long-term solution. The “Unsalted & Shark-Free” shirts and bumper stickers we amuse ourselves with were always incorrect. We are salting our Great Lakes. So far, it hasn’t mattered. But the amount of road salt used in Michigan is going up. Some interesting alternatives (beet waste, for example) have been proposed.

DOES IT MAKE SENSE FOR ANYONE in DC to object to the EPA having neglected to protect the people of Flint? Some of the same officials have tried to eliminate the EPA, or defund specific rules, or accuse it of “federal power grabs” (The Hill, 11- 23-15). When EPA administrator Gina McCarthy appeared in Washington last week, that was one accusation leveled at her. Since the EPA is also the PPA, I hope the rebuke is taken as a mandate to protect people by protecting our sources of drinking water. On the other hand, the Safe Drinking Water Act says that the EPA can take action if a drinkingwater supply even may be contaminated. Action in this case took far too long. At least drinking-water safety is getting the attention it deserves. Articles like “How Road Salt Could Turn Your City Into the Next Flint, Michigan” (Inhabitat, 1-16) are now common.

SOLAR: There’s a large solar array west of metro Detroit on I-96, and there’s a new one south of town on I-75. These are big, commercial installations. Vox.com says that in 2015, utility installations were 57 per cent of the total and, while residential rooftop installations remain the fastestgrowing segment of the solar industry, these commercial arrays are so huge, they represent a larger percentage of total capacity.

BANNING BANS DEPT: A “plastic-bag-ban” ban has been introduced in Lansing, banning the banning of bags by local governments. It’s a biggovernment override of local government by people who deride big government. With the density of plastic particles in Lake Erie now greater than in the oceans, and those particles arriving in the Lakes when any plastic item on shore is ground to bits by waves and sand, it’s a shame that big government won’t take on the issue. It’s a bigger shame that they forbid municipalities to. We can, though. Plastic bags are small, weak, and hard to carry. Reusable bags are big, sturdy, and fun to make. Look for cast-off clothes, sheets, tablecloths to make them from. Green life is one big craft project. Google “DIY grocery bags” for inspiration, but if you’re a beginner, don’t be put off by complicated designs. One is as simple as sewing the bottom of a T-shirt shut, and cutting off the sleeves and binding the next.

ENVIRONMENTAL GADFLY DEPT: The Gadfly made two rare public appearances in March, at the Ferndale Garden Club, and at Blumz, where the quarterly meeting of the SE Michigan Beautification Commissions was held. Both talks were about monarch butterflies and naturalizing one’s yard. This is one environmental issue we can act on and probably see improvement pretty quickly. Many sources are reporting far more monarchs in Mexico this winter compared to the last few, but there’s a long way to go before they rebound to numbers seen in the early ‘90s.

PLEASANT RIDGE NEWS: One of Leslie Jones’ top priorities for the PR Environmental Committee is education on lawn pesticides, with the feasibility of city bans the topic of their March 21 presentation. The photo of bright yellow dandelions accompanying the facebook notice is a reminder: dandelions are the first available food for bees, and any early butterflies.

PR’s next presentation is on Monday, May 23 at 7:00 P.M. at the community center on Ridge Road. Brendan Nolan, owner of Plants for Ecology, will be speaking on native plants. Free and open to all. A native plant sale will be held on Saturday, June 4 from 9:00 A.M. to 1:00 P.M. Find the Pleasant Ridge Environmental Committee on facebook.

Becky Hammond is a life member of Sierra Club, their former Great Lakes Program blogger, and the founder of the Ferndale Monarch Project.

If something happened with our soundness, we believe there is a solution to any maladies in a preparation. What medicines do patients purchase online? Viagra which is used to treat impotency and other states connected to erectile dysfunction. Learn more about “sildenafil“. What people talk about “viagra stories“? The most substantial aspect you have to look for is “sildenafil citrate“. Such problems commonly signal other problems: low libido or erectile dysfunction can be the symptom a strong soundness problem such as soul trouble. Causes of sexual malfunction turn on injury to the penis. Chronic disease, several medicaments, and a condition called Peyronie’s disease can also cause sexual disfunction. Even though this physic is not for use in women, it is not known whether this treatment passes into breast milk.