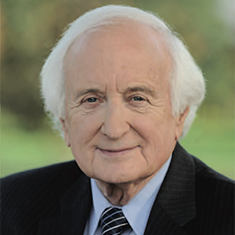 FOR 55 YEARS, REP. SANDER LEVIN SERVED THE STATE OF MICHIGAN and, more specifically, the City of Hazel Park. First elected to the Michigan State Senate in 1964, he served as Senate Minority Leader from 1969 to 1970 and went on to get elected to Congress in 1982 where he served as Chair and Ranking Member of the Ways and Means Committee and on subcommittees on trade, health and income security during his terms. Levin represented the district that included Hazel Park until his retirement in January 2019.

He reflects on that time and specifically the uniqueness of Hazel Park.

“As I think back, there was kind of a special relationship to Hazel Park and it was a community that called for some close collaboration,” he says. “I became most actively involved when I ran for State Senate in 1964 and became very good friends with leadership within Hazel Park, including the Hitchcocks, Thoms, Mastins, Gibsons, McPhersons and Davids. Vicki Levin and Betty Hitchcock together served on the initial Act 54 Oakland Community Mental Health Board”

In fact, his very first campaign office in 1964 was in the city. Although he lived in Berkley for much of his career, Levin immersed himself in the community.

“I was regularly in touch with the small Catholic parish there; I campaigned door-to-door and probably knocked on every door in Hazel Park over the years,” he says. “It was kind of a prototypical middleclass community with all the needs of middle-class communities without the huge resources other communities had. There was always a special relationship and the City always had immensely talented leadership.”

The connections he made with leaders defined many of Levin’s priorities, one of which was education due in large part to his relationship with Wilfred D. Webb (former Superintendent of Hazel Park Schools and Democratic member in the Michigan House of Representatives) who passed away in 2016.

“I was very close to the Board of Education and Wilfred Webb, who was an unusually talented educator,” Levin says. “I heavily relied on him when I was Vice Chairman of the Education Committee in 1965 and ‘66. We reformed education – both general and special in Michigan – in the mid ‘60s; Webb played an instrumental role in our efforts.”

ONE OF THE REASONS LEVIN MADE HAZEL PARK A PRIORITY was that he saw a system that was leaving behind smaller communities and he wanted to ensure they received the same opportunities as the richer areas of the County.

“Education was a major priority since the funding mechanism in the state never played fair to the needs of communities like Hazel Park, because they didn’t have a lot of industry there and they didn’t have the resources that some other communities have,” he says. “Hazel Park embodied the challenge of providing education opportunity for residents, including those that didn’t have a strong economic base. We worked to dramatically improve state aid education and reform special education and Webb was a leader in that effort.”

Several other focuses grew out of the desire to benefit the smaller cities in Oakland County.

“We also worked to build highway construction funds and develop better law enforcement programs to provide assistance to community policing,” Levin says. “I was active in designing the federal program to respond to the needs of smaller communities. The law enforcement programs were created for big communities to apply easily for federal funds and because of the needs of communities like Hazel Park we amended the law to make it better for everyone.

“Hazel Park was always a particularly active part of what I did. When there was a flood in Hazel Park some years ago, the first person that called me was City Manager Ed Klobucher. And the I-75 accident in Hazel Park – again, Klobucher called me instantaneously and we surveyed the damage and wreckage after the accident,” Levin says. “Our office always played a very active role in such events – whether it was floods, highway construction, education, you name it – there was always a special relationship with Hazel Park.”

Since retirement, Levin has taken the position of Distinguished Policymaker in Residence at the University of Michigan’s Gerald R. Ford School of Public Policy. His son, Andy Levin, was elected to continue Sander Levin’s congressional duties as of January 2019 and he represents Michigan’s 9th District which includes Hazel Park.