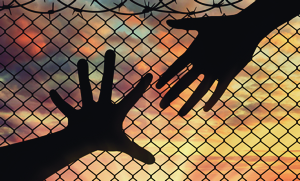 Publishers Note: The names of our local contacts for this article have been withheld at their request.

An immigrant is a person who comes to live in a country foreign to them. They may have a variety of reasons to emigrate, such as being offered a job, or the rest of their family is already living there, or a famine, for example, is making life hard. A refugee is a person who is fleeing for their life; a person who is in imminent danger of being wrongly persecuted, imprisoned, tortured or killed.. They are not choosing to leave as a convenience. They usually leave all their worldly possessions behind, pick up their children and run.

For one example, a well-known group of individuals who are persecuted in Africa are albinos. African albinos have long been dismembered and killed because their body parts are thought to have magical powers, or because of the belief that albinos are bad luck.

Because of the brutality of human upon human, there are all sorts of vulnerable populations around the globe that would qualify as refugees if they were to flee their country. Many organizations that support refugees have arisen around the globe as a result.

The International Refugee Assistance Project
The International Refugee Assistance Project (IRAP) is one such organization. Founded in 2008 by five students at Yale Law School, IRAP is a nonpartisan organization located in New York that organizes law students and lawyers to develop and enforce legal rights for refugees and displaced persons. Shortly after being founded, law student counterparts at New York University and U.C. Berkeley founded IRAP chapters.
What began at a single law school at Yale has bloomed into a legal movement. The law students realized the importance of engaging pro bono attorneys to provide direct legal representation to refugees over-seas who never had access to counsel. The unique model of partnering law students with pro bono lawyers allows IRAP to leverage every dollar contributed into ten in legal aid.

In 2010, IRAP joined the Urban Justice Center, a public interest organization headquartered in New York. Since that time, IRAP has established offices in Jordan and Lebanon. The network of legal represenatives has grown to 29 IRAP chapters at law schools in the U.S.A. and Canada, and is supported by over 75 international law firms and multinational corporations that provide pro bono assistance.

IRAP serves many different populations of refugees, but it serves Iraqi refugees because of the clear obligations of Western countries, and the U.S. in particular, to provide relief to unintended victims of the Iraq War. IRAP has expanded to assist refugees from Afghanistan, Egypt, Eritrea, Ethiopia, Iran, Jordan, Kuwait, Libya, Pakistan, Palestine, Somalia, Sudan, Syria, Turkey and Yemen. Increasingly, IRAP is providing service to more people from Syria because of civil conflict, and also many Somalis and Sudanese.

Their mission is to mobilize direct legal aid and systemic policy advocacy. IRAP focuses on and provides legal services to the world’s most vulnerable and persecuted individuals while empowering the next generation of human rights advocates and leaders. As a result of their impact, in recent years, the demand for IRAP services in the Middle East and North Africa has risen dramatically.

IRAP overseas fields a staff of lawyers, case managers, and interpreters who work in cooperation with non-governmental organizations, international government organizations and governmental partners to swiftly identify refugees in dire need of assistance. IRAP’s caseload expansion is frequently driven by the 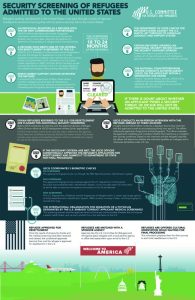 emerging needs of highly vulnerable populations in the countries in which they operate. Their presence on the ground coupled with their legal expertise and knowledge of local cultural norms, uniquely positions them to respond to emerging crises effectively and in real time.

The demographic groups that IRAP serves the most often include the most vulnerable, at-risk refugee women who have become the victim of gender violence, Iraqis and Afghanis targeted by militia groups, LBGTs who are targeted for their lifestyle, and any person whose safety and lives are in danger.

As the only organization that guides refugees through every step of the resettlement process, IRAP is often able to identify obstacles of which other institutional players are unaware. Their unique model utilizes lessons learned in individual casework to advocate for systemic changes that benefit broader refugee populations. While they never turn away an urgent case that has merit, they look for cases where legal work can create precedents that will benefit the wider refugee community.

IRAP builds untraditional, nonpartisan coalitions to advocate for the rights of refugees, ranging from veterans to religious groups to corporate attorneys. They also play a major role in including refugees in U.S. immigration legislation, drafting legislative language around issues such as access to counsel and formal appeals processes, special procedures for LGBT refugees, and expansions of the U.S. Special Immigrant Visa (SIV) programs for Iraqi and Afghan wartime allies.

The Process
When refugees arrive in our country, we only witness the very last step in the very arduous process of qualifying as a refugee. The eating process is intense and protracted, and can last anywhere from 18 months to several years after referral.

Refugee processing involves eligibility screening with paperwork, background cjecks, bio-data (fingerprints, iris scans, etc. are all checked through the FYI, the Department of Homeland Security, and the Department of Defense), interviews, medical screening, travel loans, flight plans and resettlement – which is another entire process.

Once a refugee passes all the security checks and is allowed passage to the U.S. , a Customer and Border Protection officer reviews their documentation and conducts additional security checks against its National Targeting Center-Passenger program and the Transportation Security Administration’s Secure Flight Program. CBP ensures that the arriving refugee is the same person who was screened and approved for admission to the United States.

The Struggles are Real
The hurdles for refugees and their families are high and many, staring with language barrier, frequently being separated from their loved ones, terror of being sent back, the hunger, thirst, cold and exhaustion that comes with trekking and surviving the flight out of their country of origin. Many die and many more are on the brink of physical collapse at times. All this, just to get to the country of first asylum where they are often herded into fenced retention camps and live in flimsy tents and given very few freedoms. Many face prejudice and anger from the natives int eh country of first asylum.

IRAP is one of the first organizations to support a refugee by helping them prepare their documenation and legal status. For refugees, access to this legal assistance is just as important as access to food and shelter. Legal assistance is literally life or death for them.

The world is facing a refugee crisis the likes of which we have not witnessed since Work War II. Refugees around the world continue to be neglected, victimized, and denied the procedural safeguards that are the hallmarks of a just society. IRAP is providing safe passage and new beginnings for the most at-risk refugees. A the same time, they are also providing crucial support and building capacity in their field.

They are always interested in finding more people to support them. If you are interested in learning more or supporting the noble work of IRAP, please visit https://refugeerights.org