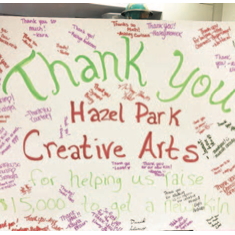 ARTS PROGRAMS IN K-12 SCHOOLS ALWAYS SEEM TO BE THE FIRST TO GO WHEN BUDGETS GET TIGHT, AND SCHOOLS OFTEN HAVE TO GET RESOURCEFUL TO FIND FUNDING. This is what prompted the creation of Hazel Park Creative Arts, a 501(c)(3) organization dedicated to supporting the Hazel Park School District’s art programs.

Since its founding in 2014, the group has accomplished quite a few noteworthy projects. They started small by collecting art supplies for Hoover Elementary and tuning the piano for the high school choir, but quickly moved on to larger, more impactful goals like procuring a new kiln in November 2016.

“Our first major project was an effort to replace the pottery kiln in the high school. The kiln was estimated to be about 30-years-old and was showing its age in down time, repair costs and electricity usage,” Vanderveer 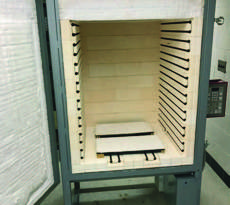 says. “Working with the high school art department, we helped raise $15,000 to replace the old kiln with a brand-new, front-loading kiln. Many students in the district have been awarded scholarships for their ceramic art abilities, and the new kiln is a small part of that success.”

Most recently, they replaced the high school auditorium’s lighting control console. The mechanism was 15-years-old and produced by a company no longer in business, making it hard to find repair parts. Hazel Park Creative Arts was able to raise $6600 through fundraising and had the new lighting console installed just in time for theater season.

“The new console arrived at the school in February of 2018, and was used for the first time in the Hazel Park

Drama Club’s performances of Seussical the Musical in April,” Vanderveer says.  Hazel Park Creative Arts is made up of four board members that meet the first Monday of each month. The majority of their work is completed through fundraising events; their two largest being a Fall Dinner held at the Junior High on October 5th and a Spring Night Out the Friday before the high school drama club performance.

“We very much appreciate the support the City of Hazel Park, its residents, and local businesses have given our organization and fundraising events,” Vanderveer says. “It’s great to see our city come together to support the arts in the school district;  None of what we do is possible without that support!”
Hazel Park Creative Arts is currently looking for their next major project. Anyone interested in attending board meetings or donating can reach out through their website, hpcreativearts.org.