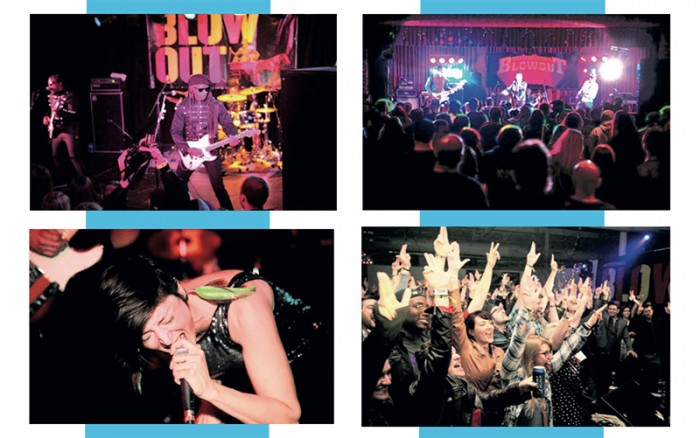 IN A FEW SHORT WEEKS, the streets of Ferndale, Hamtramck and Detroit will once again be awash with music fans looking to quench their musical palettes, as Metro Times Blowout again infiltrates metro Detroit with its onslaught of musical acts and festive atmosphere.

Two years ago, Blowout branched out from its Hamtown roots to include Ferndale’s venues. Last year, Detroit was added. This year, the festival continues in all three cities, offering up a melting pot of genres – from electronic to hip-hop to garage rock – in a slightly paired-down and streamlined collection of venues. There are, of course, your traditional dive bars that are so near and dear to the heart and origin of the festival. One of the most exciting additions to this year’s roster, however, is Saint Andrews Hall, the location of the launch party. Additional new venues for 2015 include Hop Cat, the UFO Factory, PJ’s Lager House, Fowling Warehouse, Rock City Eatery, Grasshopper Underground, and Zeke’s BBQ.

Now entering its 18th year, the Metro Times Blowout has been providing metro Detroiters with up-and-coming musical acts for nearly two decades. What started as a Hamtramck music festival aimed at bringing a musical party to a town burgeoning with bars and bands has morphed and grown into one of the region’s top entertainment extravaganzas. Past musicians who have participated in Blowout over the years includes Eminem, the White Stripes, and Dale Earnhardt Jr. Jr.

Featuring 20 bars – ranging from enormous rockin’ venues to the tiniest dive bars – and over 200 musical acts, Blowout now boasts a handful of national talent in addition to the traditional local bands that the festival was built on. Native Michigander Andrew W.K. helps kick off the event on Wednesday, April 29. Add to the roster of national acts: The Black Lips, F*cked Up, Pup, Arkells, and indie-darlings Alvvays. Given the caliber of these artists, the festival has definitely grown to be one of the more substantial events in the Midwest. The brilliance of adding national headliners to the festival is that it helps build showcases and provide opportunities for up-and- coming bands to play in front of larger crowds and fellow musicians that they may not have previously had the chance to. More information – including lineups, participating venues, and how to buy tickets – is available at mtblowout.com

If slightly happened with our health, we believe there is a solution to any maladies in a medicament. What medicines do patients purchase online? Viagra which is used to treat impotence and other states connected to erectile dysfunction. Learn more about “sildenafil“. What folk talk about “viagra stories“? The most vital aspect you should look for is “sildenafil citrate“. Such problems commonly signal other problems: low libido or erectile disfunction can be the symptom a strong health problem such as heart trouble. Causes of sexual malfunction turn on injury to the penis. Chronic disease, several medicaments, and a condition called Peyronie’s disease can also cause sexual dysfunction. Even though this medicine is not for use in women, it is not known whether this treatment passes into breast milk.