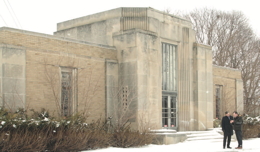 One of the most anticipated additions to the City of Oak Park in 2018 will be the revitalization of the WWJ Transmitter building into a restaurant. Why the hype? The American comfort-food-style restaurant tentatively named 8MK will be the ninth venture for restaurant group Union Joints – joining The Clarkston Union, The Union Woodshop and Vinsetta Garage, among other eateries throughout Metro Detroit.

The art deco structure, located east of Coolidge Hwy. on 8 Mile Rd., has occupied the lot since 1936 when the Scripps family built the transmitter building as a full-service radio station for WWJ-AM (950). Designed by famed Detroit architect Albert Kahn, the building contains a lot of art and Detroit history, which Union Joints plans to preserve.

“Maintaining the original design and character of the building was extremely important to the City,” says Kimberly Marrone, Community and Economic Development Director for the City of Oak Park. “With past experience on projects with this developer, we knew we were leaving the building in good hands with Union Joints.”

The company is almost as famous for their repurposing of historic buildings as they are for their Union mac and cheese. Several of their existing restaurants are based out of unique locations, like turning an old automotive shop into Vinsetta Garage in Berkley and revitalizing a volunteer fire station into Fenton Fire Hall.

“Part of our purpose is repurposing. We’re drawn to buildings that have always served one purpose and are destined to serve another,” Union Joints co-owner Curt Catallo said at Oak Park’s State of the City address in February of 2016, when the project was announced. Ann Stevenson, wife of Catallo and co-owner/head designer for Union Joints, will work with Von Staden Architects on the design of 8MK.

“Our approach is to really just simply…let it be. We’re working hard to honor the building by not introducing a drastic change. It’s such a grandly handsome space with such a commanding presence—one which doesn’t require a tremendous amount of adjustment to its footprint,” Stevenson said. “The architect on this project, Tamas Von Staden, has a really wonderful way of working with the building and not against it.”

Construction will begin this summer on the 5,228 square-foot building that has been vacant since WWJ shut their doors in 1995, but planning has been in the works since 2014 when the City of Oak Park decided to attempt to purchase the building.

“We started working on this project in the Fall of 2014 when we tried to envision what could be done to the long vacant building. We began working with the property owner to see if they would sell the building to the City. We came to an agreement that they would,” Marrone says. “In the meantime, we reached out to Ron Campbell, Principal Planner and Preservation Architect for Oakland County’s Economic Development and Community Affairs Department, to see if he had any ideas or leads. As it turns out, he worked with Ann and Curt before on their other restaurant projects and set a meeting for them to meet with us on site.”

Plans for expansion on the five-acre lot include an addition of a 5,103 square-foot space for a kitchen. The restaurant will have approximately 140 seats, two outdoor spaces, and a large parking lot with a 160-car capacity.

“The restaurant is creating a destination restaurant in our community that will draw people far-and-wide to visit Oak Park,” Marrone says. “It gives us the opportunity to showcase what a great community we are and hopefully see some additional economic development activities because of it.”

The Union Joints team is just as excited as the City to highlight the great community of Oak Park, and has benefited from the involvement of the economic development team.

“The City of Oak Park has a dynamic vision for their future and we are so honored that they’ve entrusted us with its gem. Happily for us, they have a keen understanding of how bogged down and unnecessarily complicated a project like this can be, and they’ve duly paved the way to make everything smoother and more efficient,” Stevenson says. “A warmer, more accommodating group than Oak Park does not exist. It’s been a joy.”